How To Care For Your Plants During A Drought

Whether you live in a country with four seasons or two, there’s one common challenge for gardeners and plant enthusiasts: the dry season. It can get extreme to the point where it may be difficult to help your plants survive. During a drought, you have to give your plants a lot of extra care; otherwise, they’ll succumb to the heat.

When the weather’s unbearably hot, the condition of the soil will also be negatively affected. Not only will it be literally drier, but some parts of it may crack or harden, so it’ll be more difficult for the soil to retain the water you provide it with.

To help you out, this article gives you everything you need to know about taking care of your plants during a drought or once the dry season comes around.

Focus On Your Trees And Shrubs

Especially if you have fruit-bearing trees and shrubs, during drought or extremely dry seasons, it’s best for you to focus on shrub and tree care rather than lawn care. This is all the more true if you’re trying to conserve water during the dry months. Depending on where you’re from, it’s not uncommon for the water supply to dwindle, so you have to be mindful about your usage. 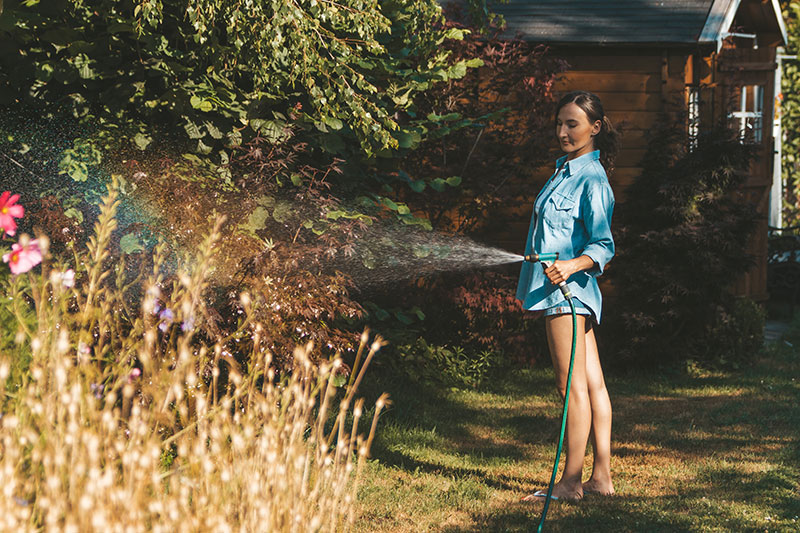 If that’s the case for you, it’s alright to let your lawn go brown. When the weather gets better, it’ll grow green again and be healthy. Unfortunately, that isn’t the same for trees and shrubs. If they don’t get enough water regularly, they might stop producing fruit and eventually die. Apart from this, dead trees can be a nuisance or danger, so you may need to have them cut down. This would defeat the purpose of having a tree given that during the dry season, you can use them for shade and much-needed comfort from the heat whenever you need to be outside.

Watering your garden is all the more important during a drought because doing so will help prevent the soil from cracking and hardening. However, you have to be more strategic with the task when it’s the dry season.

Doing this over your soil during a drought or the dry season can keep it cooler and protect it from direct sun. The mulch will be able to retain the moisture in the soil longer, so your plants have enough water to absorb even when they may be extra thirsty due to intense heat.

Typically, two to three inches of mulch is already more than enough for your plants’ needs. As you’re applying it, run the soaker hose under it. That way, the water will go directly to the ground and nowhere else, and you’ll be able to save water. The best types of mulch you can use are pine straw, shredded leaves, and bark mulch.

While you may think you need to double-time with feeding your plants fertilizers when it’s the dry season, this may not necessarily be the case. During a drought, it’s recommended to stop applying fertilizer. By using fertilizer, even if it’s from an organic source, you’re encouraging them to grow, which would make them thirstier. If you’re unable to keep up with their care due to the lack of water, rather than flourish, your plants may end up dying.

The tips above can be the saving grace of gardeners who may be dreading the upcoming hot, dry months. Continuously rising global temperatures have made taking care of plants during the warm season a lot harder than ever before. During that period, you’ll have to put in extra effort to ensure that your plants survive. Although there’s nothing you can do to change the weather, there are other factors you can control when it comes to plant care. As you can see, it’s not impossible to keep your plants alive and well during a drought as long as you know what and what not to do.