How to remove rust from tools in an easy way

Although metal is an extremely durable material, it does have one major weakness: rust. Steel tools require constant use to avoid suffering irreparable damage from this chemical process, or at least, periodic maintenance. The problem is that many times we realize this when it is too late and a large brown stain is slowly eating away at the metal. However, as long as there is no physical damage on the steel, the rust can be removed. In the article below, you will learn how to remove rust from tools to extend their useful life.

Oxide is a natural process that occurs on some metals when they are exposed to moisture and oxygen for a long time. This manifests itself in corroded layers of brown color as if it were a fungus. 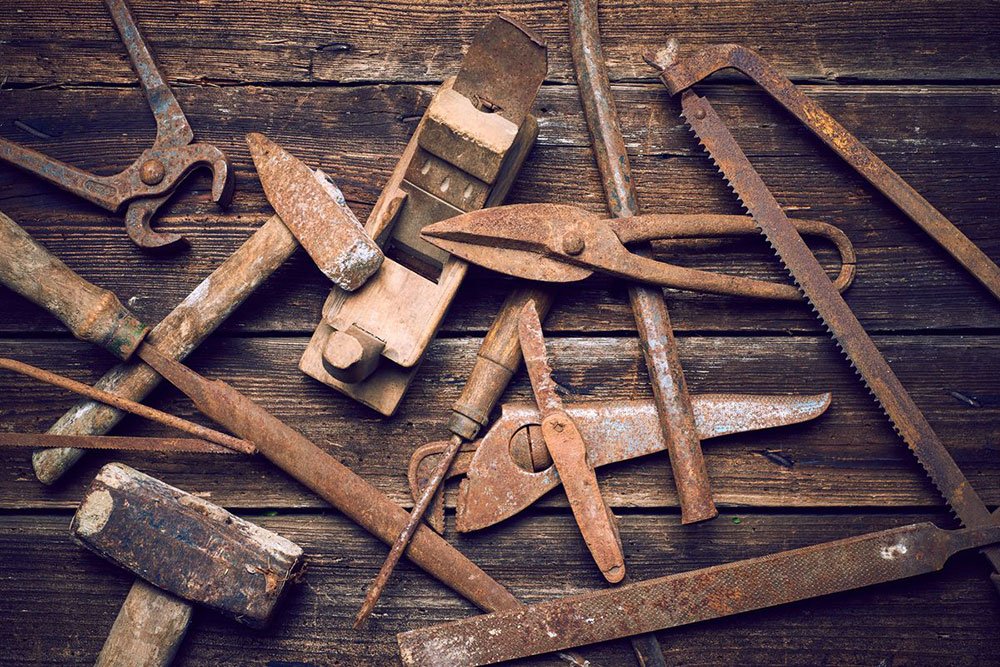 Like a parasite, the oxide will penetrate the metal structure until it cracks or disintegrates. However, the presence of rust on its own is not enough to damage a metal tool. It must take a long time for this to happen, so even when you see rust on the tools, you can still clean them.

Removing rust from tools is a time-consuming task, so you shouldn’t despair if some methods don’t work.

How to remove rust from tools with physical methods 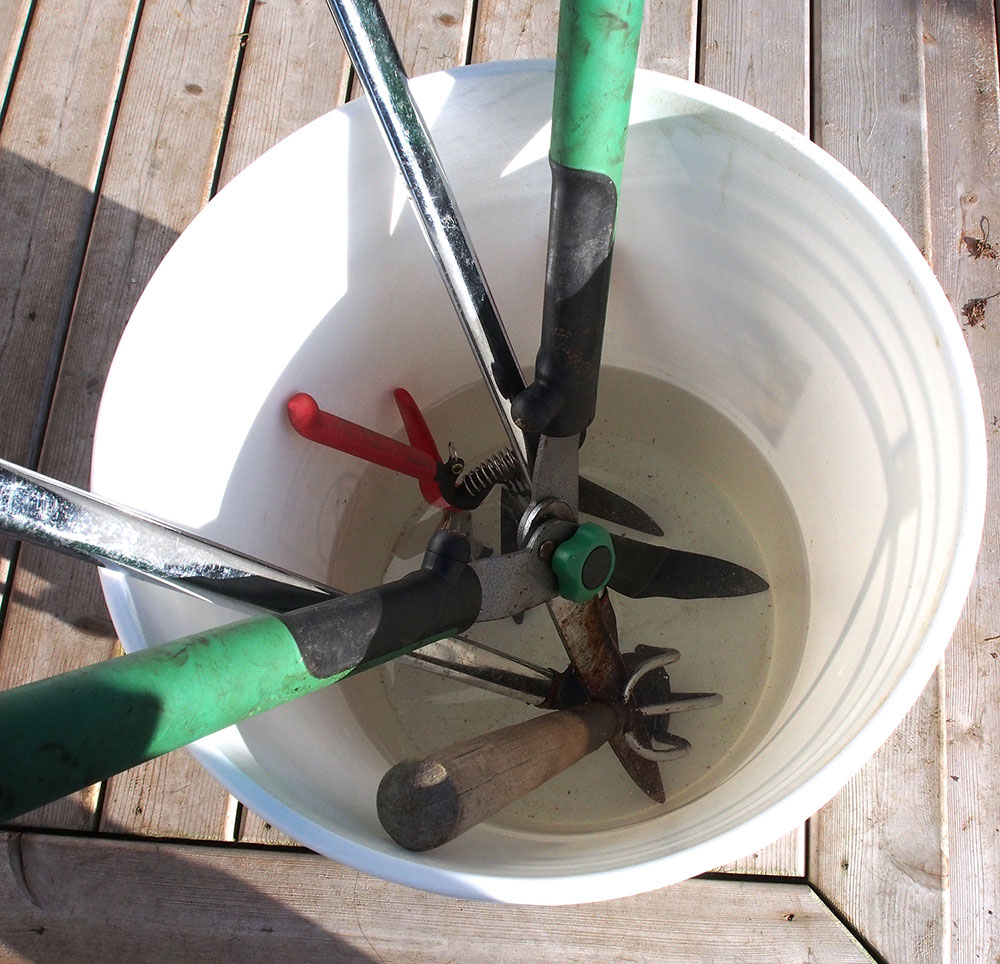 There are multiple ways you can remove rust from steel using some brute force and literally scraping it off the surface. Sometimes these options are not enough to remove the rust, but it never hurts to try to remove the thickest layers before working on internal damage.

Before you start sanding and scraping, the first thing to do is clean the tool with soap and water. In a large container where you can immerse your tools, prepare a mixture of hot water with degreasing detergent.

Put the tool in the water, and using a sponge, try to remove as much grease and oil as you can. When finished, rinse the tool with clean water and dry it using a clean cloth. Leaving moisture on the steel could cause more rust in the future. 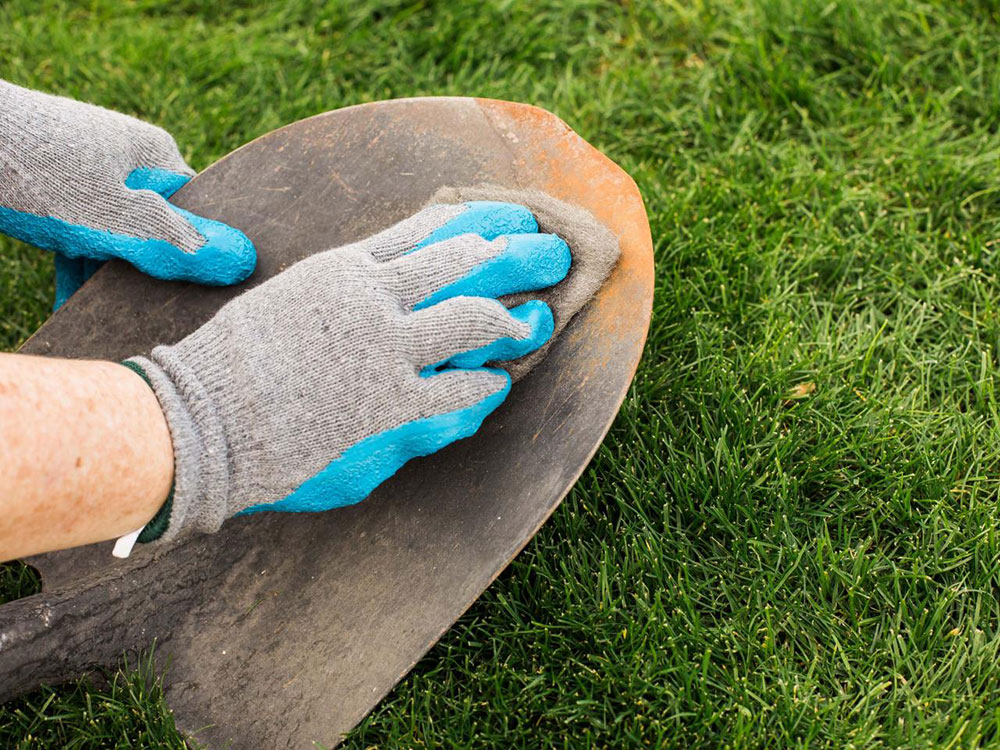 The next step for cleaning rusty tools is to remove the rust using an abrasive pad. The type of pad you use will depend on the severity of the rust you want to clean. For thinly layered surfaces, using a steel sponge or sandpaper should be enough.

Always remember to start from the areas that are most affected by rust to take advantage of the abrasive pad’s hard bristles. Then, proceed to clean the thin layers. 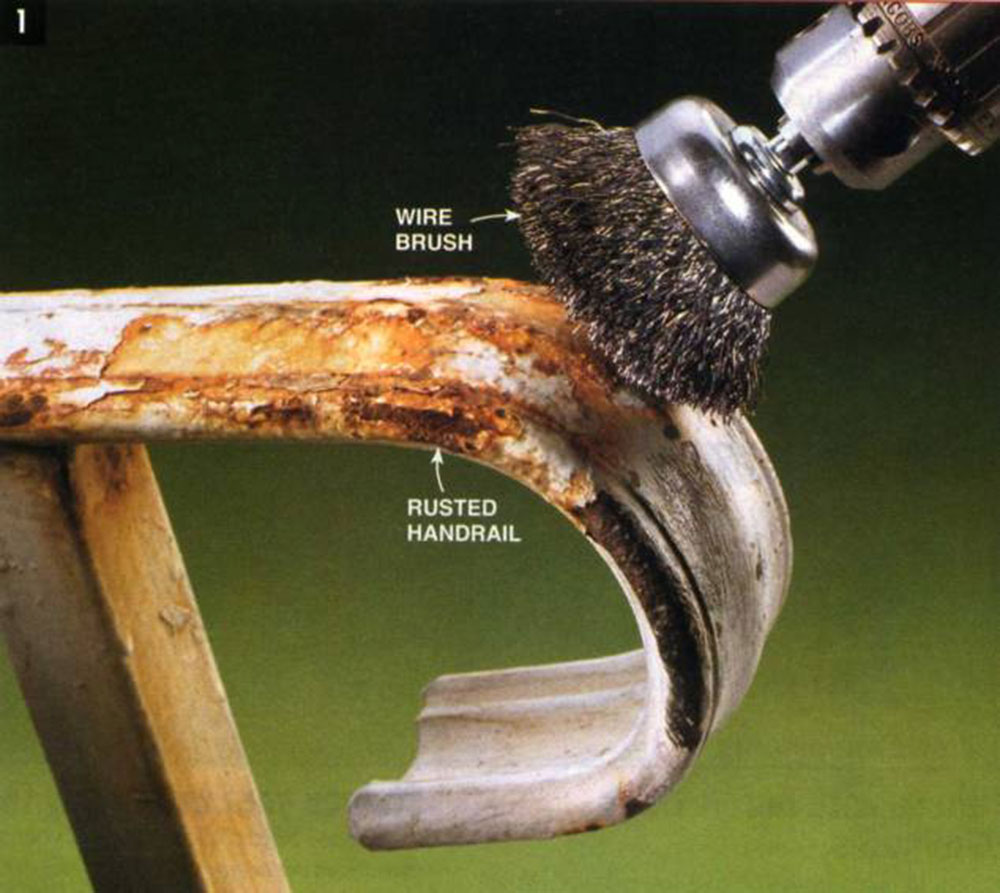 In case the rust has not come out, you will proceed to use the final resource: a drill combined with a wire wheel. You will polish the tool until the rust comes out completely.

To avoid disc wear, you will need to moisten the tool with a coat of kerosene. You will have to wait for it to dry a little so that there are no accidents when polishing. 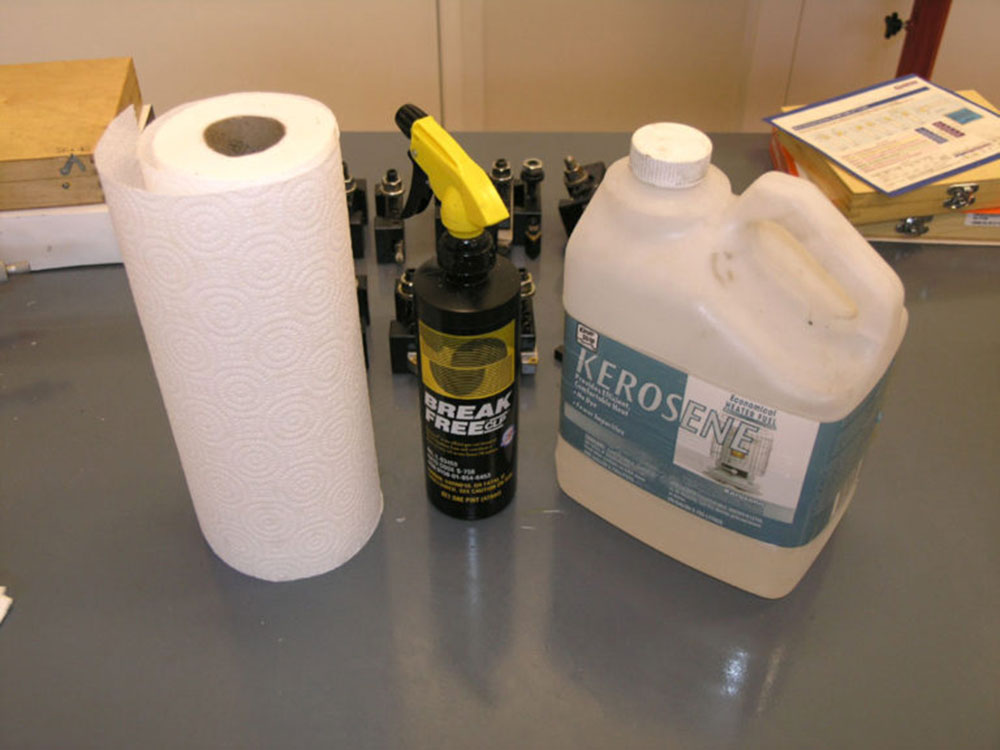 This rust remover tool will leave a rustic finish on the steel surface, which can be smoothed using fine-grit sandpaper. This sanding process will also work to remove any rust’s remnants.

Now all you have to do is clean the tool with water. Remember to dry it to prevent rust from reappearing.

How to remove rust from tools with vinegar and salt 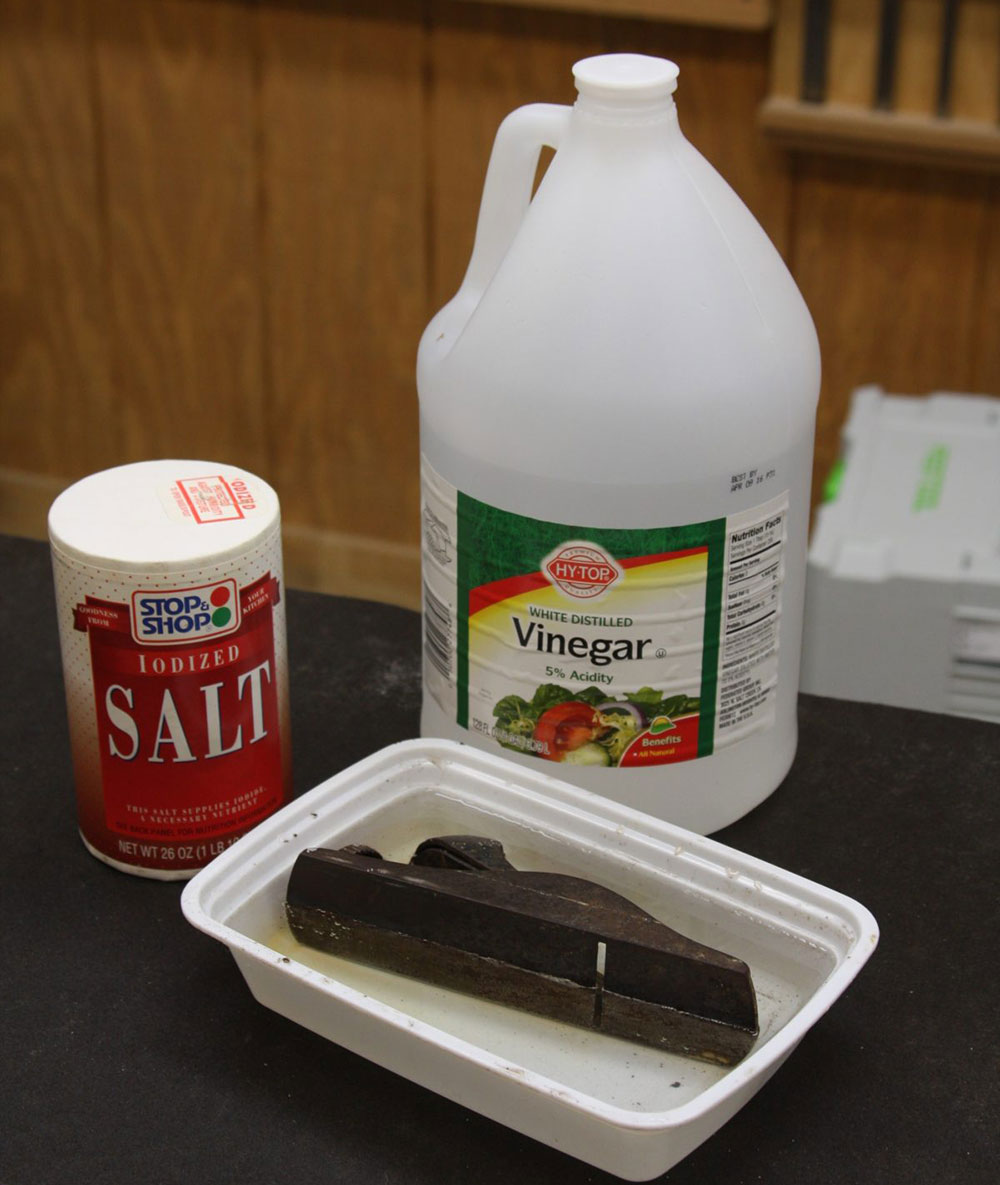 In case the physical method has not worked, it is time to use the chemical options for cleaning rusty tools.

For deep cleaning, you may need to take apart the tools. As with the physical method, the first thing you have to do is wash the different steel pieces with hot water and degreasing detergent.

Vinegar combined with salt will slowly clean rust off tools. For this, you will have to leave them immersed in a vinegar bath in a container for approximately 2 or 3 days.

To make the mixture, you will need to pour ¼ cup of salt for every liter of white vinegar. You must pour the salt evenly, or stir the vinegar after you pour the salt so that it spreads.

After 24 hours, you should see the thicker rust begin to come off the tools. The thinner parts probably won’t go away, but thanks to the salt and vinegar, they can now be easily removed.

Now, proceed to carefully remove the tools from the vinegar and salt mixture; gloves are recommended if you are going to do it with your hands. It is time to remove the most difficult residues using a metallic sponge.

To get all the rust off tools, you will need to clean vigorously, as rust tends to appear in grains and streaks on the steel. 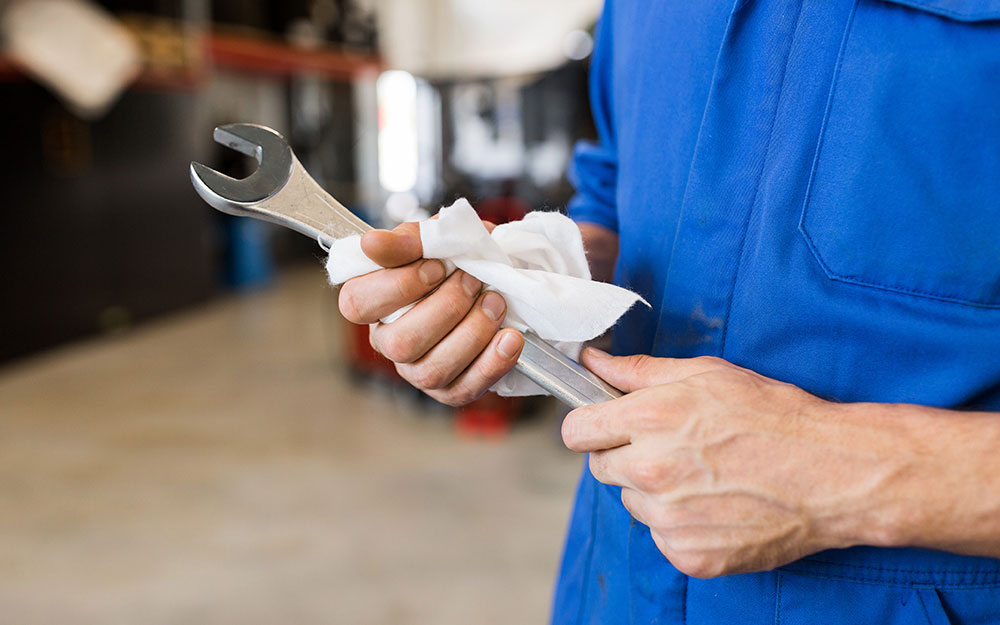 The next step to clean rusty tools is to wipe off the excess vinegar with absorbent towels. If you want your tools to regain their original shine, it is best to apply a coat of lubricating oil after they are completely dry, which will act as a protective barrier against rust.

Lemons are an alternative 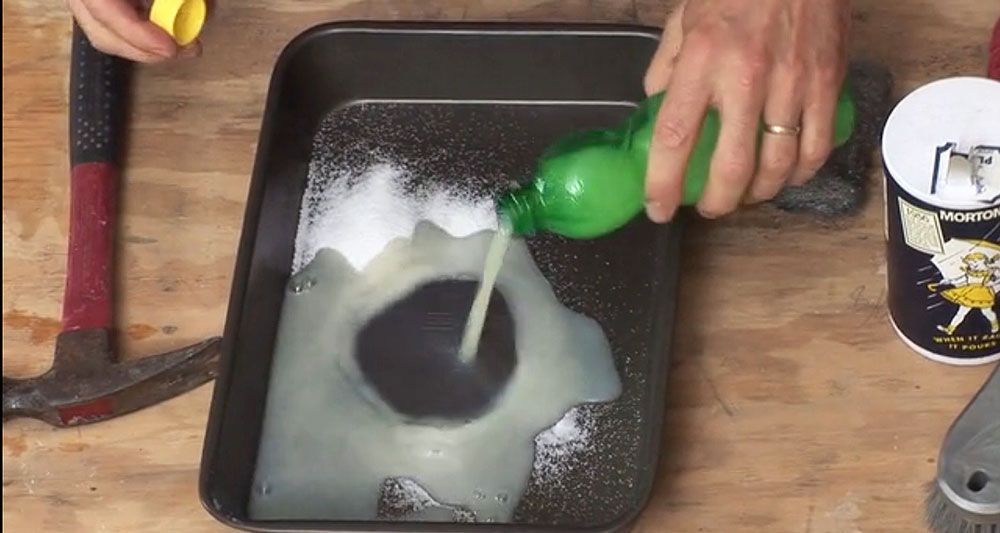 If you don’t have vinegar or don’t want to spend it, you can replace it with lemon juice. Sure, you’ll need a lot of lemon juice, but citric acid will work perfectly for this project. You can also use lemon juice to clean tools in general; you just have to remember to dry them at the end.

The only difference from the process is that, at the end of the lemon soak, you must apply a layer of baking soda to the steel to neutralize the juice’s acidic effect, or you will not be able to lubricate the tool.

Use baking soda for small jobs 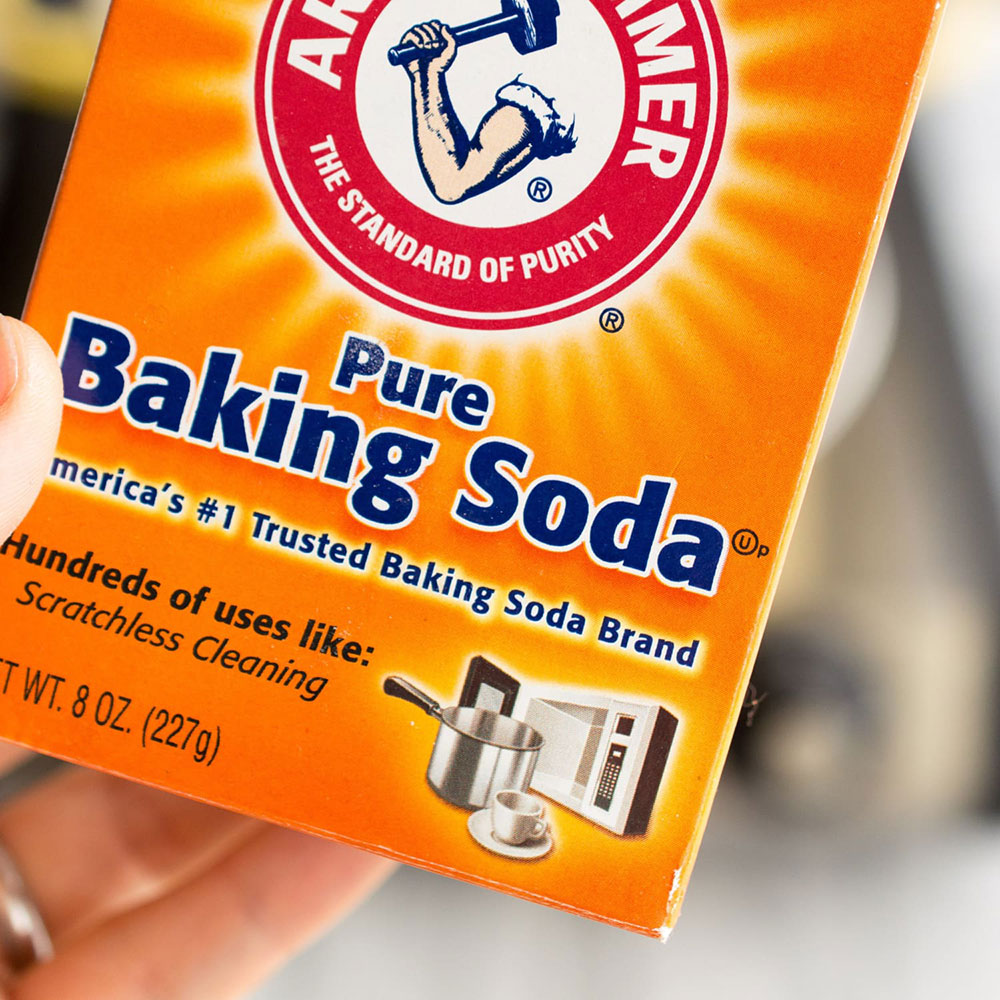 When the rust stains are not very large, or you just want to do routine maintenance, you can use baking soda on the steel.

Don’t know how to remove rust from tools using this cooking powder? Well, it is very easy! You have to prepare a pasta with it. Mix water with baking soda in a bowl until you get a pasty and liquid compound.

Put some of the paste on the affected areas, and let it sit for a couple of hours or overnight. The bicarbonate’s corrosive effect should loosen the rust so that it is easy to remove it with a brush. Pour clean water to remove debris and dry the tool.

Use rust converter for professional finishes 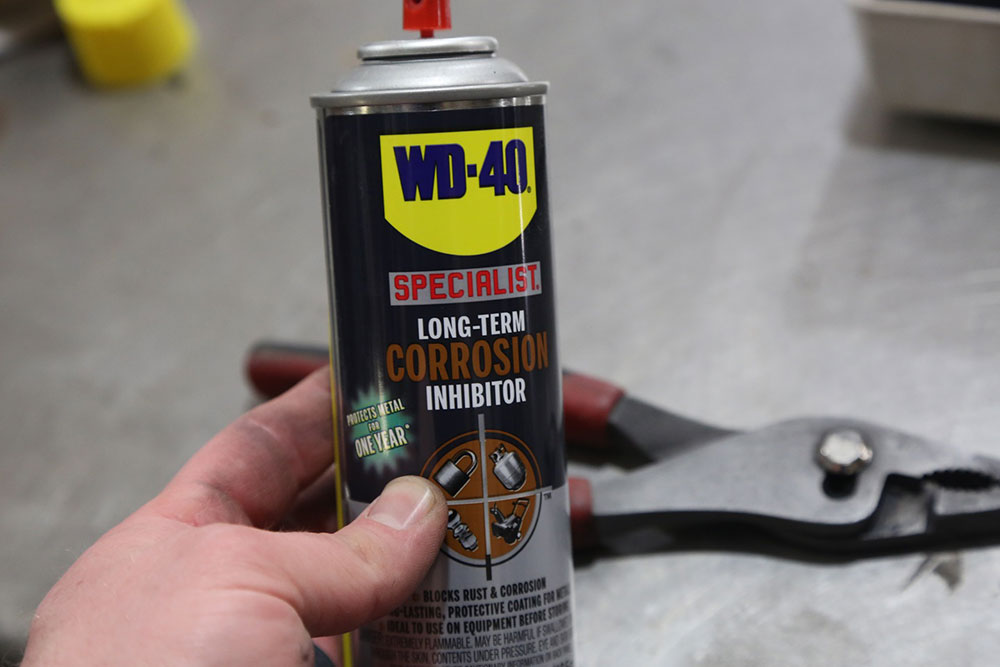 You can skip all homemade solutions and go straight to using a specialized rust neutralizer. Any neutralizer will work to clean your tool, and you won’t need to spend hours removing the thickest layers of rust.

The only defect these converters have is that their abrasive action will leave a rustic texture on the steel. This can be a problem if you want to paint the tool later as you will need to apply a primer coat that works as a base for the paint to adhere to.

Steel that is badly damaged by rust is prone to melting if a rust converter is applied, so be careful.

When all else fails, use oxalic acid 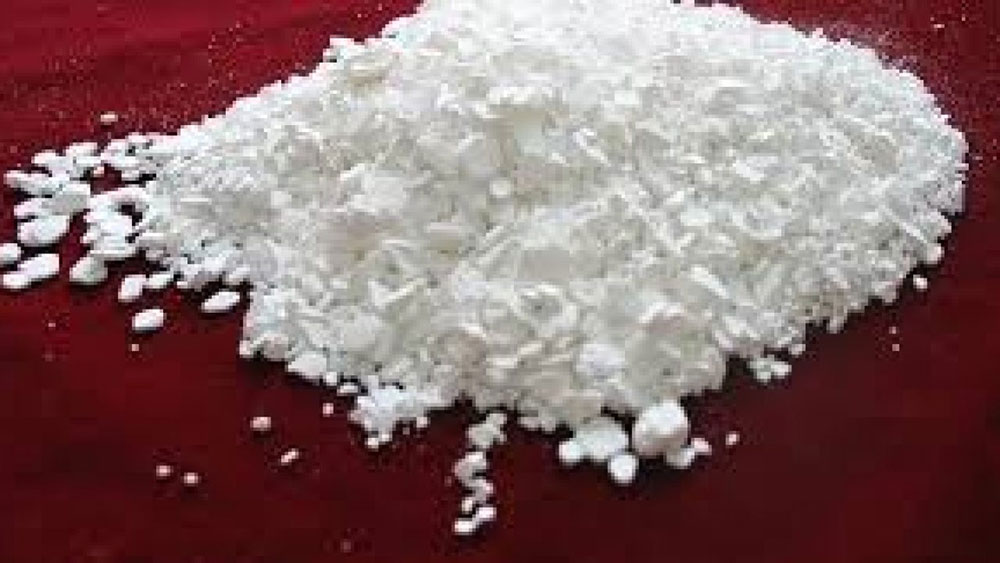 This is another commercial alternative, but it is much more dangerous and strong than the previous one. Oxalic acid will remove any type of rust regardless of its severity.

Before applying, you should be prepared with safety equipment such as goggles and rubber gloves. Also, to avoid poisoning, use the acid in an area with enough ventilation.

Clean your tools with anti-grease soap and water, and dry them. Now, into a large container with enough space for your tools, pour in a gallon of water and three tablespoons of the oxalic acid. Carefully stir the mixture so that the acid dissolves. 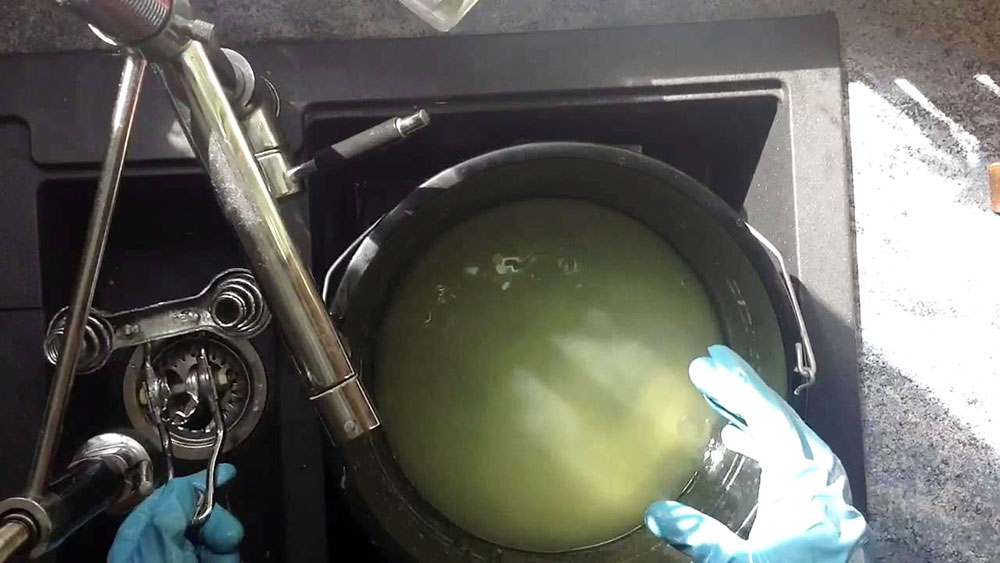 Put the tools in the mixture for 20 minutes. Remove them from the container, rinse them with plenty of water, and dry them. They should no longer have rust stains.

A deep cleaning by electrolysis 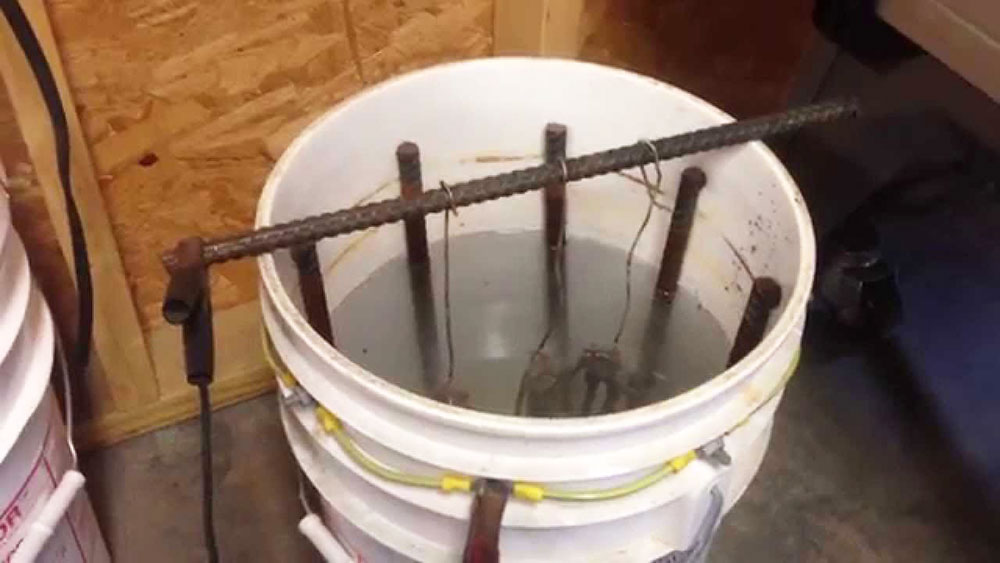 If there is something that rust cannot bear, it is an electric shock when submerged in water. The process, known as electrolysis, breaks down the rust completely and without you having to actively participate in the cleaning.

To do this, you will need a container that you can fill with water, an iron bar that you don’t need (you will lose it), a battery charger, and washing soda.

If you want to know how to remove rust from tools using this process, we recommend you carefully review the tutorials that we leave below.

It is best to avoid rust

Whether you’ve just cleaned your tools, or they’re new, the best you can do is prevent rust from appearing on the steel. Although you can clean them multiple times, at some point the metal will not withstand the rust’s effects, irreparably damaging it.

There are three basic tips you should apply to prevent rust from appearing on the steel.

If you enjoyed reading this article about how to remove rust from tools, you should read these as well:

How To Get Rid Of Ants In The Kitchen Quickly

How to get a smooth finish when painting kitchen cabinets

How to clean the kitchen faucet head