Modern Gothic Interior Design With Its Characteristics And Furniture

Gothic Interior Design and Medieval Interiors represent the same era – the Middle Ages, however, that is where the similarities end. They are two quite unique styles.

Often the term Gothic Victorian house interior causes people to imagine creepy, decrepit mansions with black walls and windows with heavy drapes shutting out any light. The typical idea of a Gothic room sends shivers down the spine of most people.

In reality, Victorian Gothic is an architectural style found as early as the 1740s with designs so beautiful and intricate that modern homeowners seek to incorporate these Gothic interior design characteristics into the look and feel of their homes.

The modern Gothic interior design movement offers intricate, elegant and beautiful pieces for your home. To incorporate this opulent style into your home, there are several descriptions of the style followed by ideas to inspire your Gothic inspired interior design. 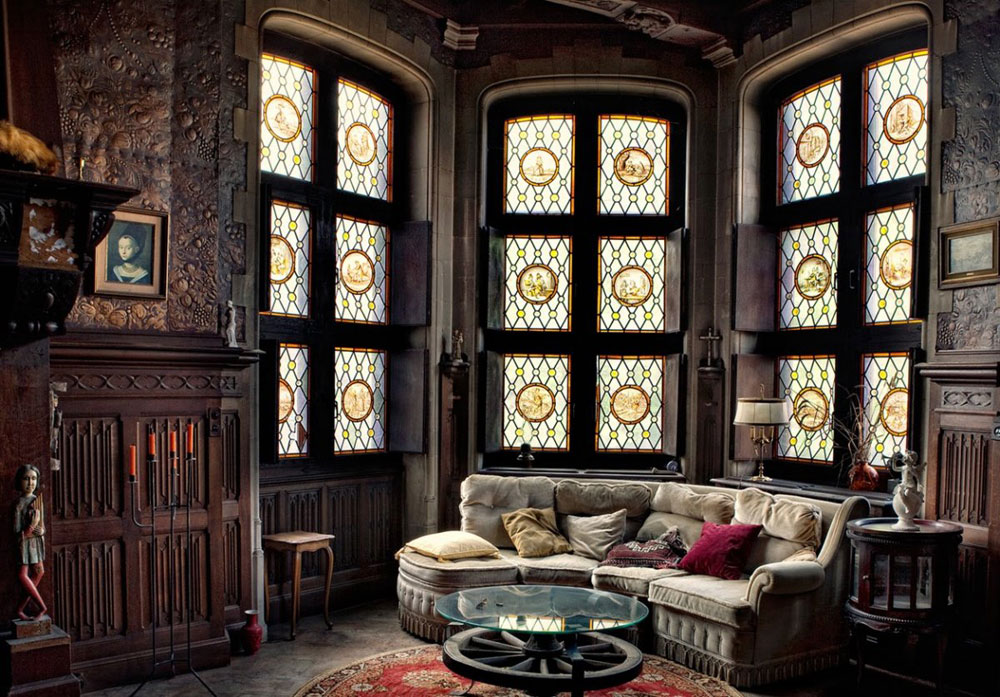 Gothic architecture first took the stage around 1150 AD during the Medieval Period, when it became a significant part of building design. At that time, it was known as “the French Style.”

You can still find many gorgeous examples of the Gothic Style in the United Kingdom and throughout Europe in general and in Paris, France, in particular. The design is most apparent in the Gothic cathedrals which were built to endure for centuries.

Today, these works present modern society with a chance to see the significant ability, the never-ending determination and solid engineering used in creating these awe-inspiring structures. The ‘flying buttress,’ perhaps the most recognized Gothic element today, was created in the medieval era. A perfect example of an early flying buttress can be seen at the Notre Dame Cathedral in Paris, a gothic cathedral which is famous throughout the world.

Gothic’s ‘pointy’ style was an ornate look used in doorways, chairs, and archways in a way that medieval society had not seen before. Architects used symmetry in a proportional manner to balance the Gothic interior’s space.

The gothic interior design also introduced the divinely inspired, ecclesiastic style, which represented an era where the Catholic church had triumphed over paganism throughout Europe. This divine movement created a new age of breathtaking Gothic style cathedrals, which spurred engineers to invent new building methods to support the extreme mass required for these majestic structures. 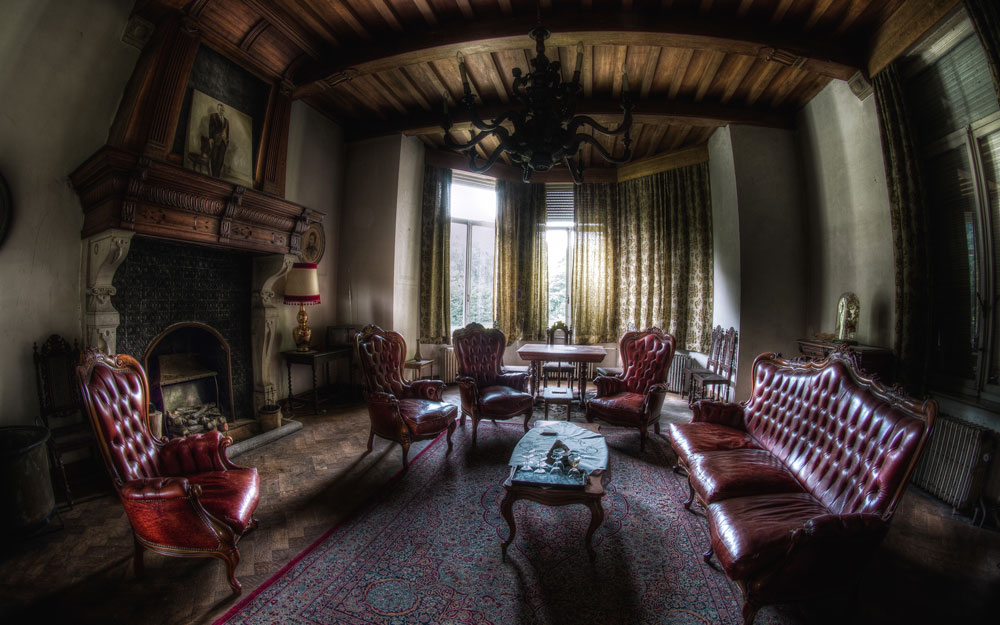 So, now when you imagine the Victorian Gothic style, imagine ancient, intricately decorated churches instead of dark, dreary rooms. Picture yourself in a sanctuary with stately stained glass Gothic windows with complex designs of trefoils or roses. Majestic fireplaces hold court below the exposed wooden rafters and beams, as fluttering candlelight completes the divinely inspired look.

The Gothic design was a vertical style, created by the looming Gothic arch, and as windows grew larger and larger, the light came to play a greater role in Gothic décor. This increased amount of light and air flow enlivened the once dark and glum feel of Romanesque-era churches. 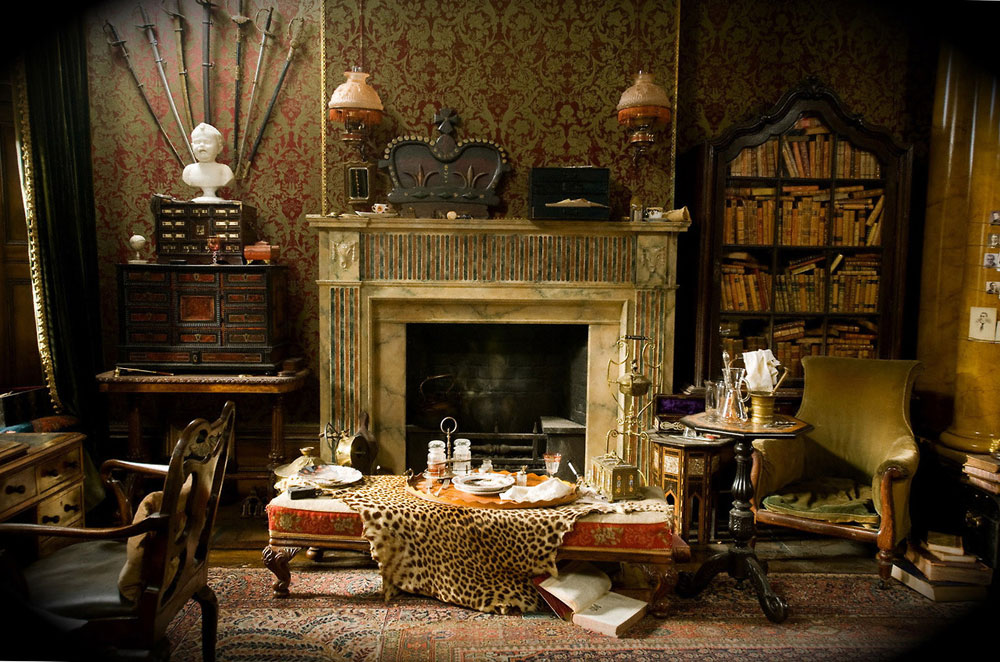 Gothic Furniture – Gothic Victorian furniture was made of heavy, sturdy oak, and adorned with period designs. The chairs, headboards, and cabinetry abounded with arches, legs with spiral turns, and upholstery of heavy fabrics made of dark, majestic colors. If you are inspired by Gothic design, consider retired pieces from an old church, including pews, benches, altar chairs or trestle tables. The Arts and Crafts era furniture pieces share similar motifs and be an acceptable alternative for your Gothic room.

Gothic Color – With majestic architecture and heavy furniture, the Gothic style lends itself to rich and dark colors. The Gothic Victorian house had somber hues of purple, ruby, black, ochre, forest green, and gold –  the best complement to the rich, majestic air of the furniture and design. Gothic patterns of flowers and greenery were used to cover walls.

Gothic Influences – The church was the largest influence on gothic designs, and this ecclesiastical inspiration is obvious in its style. Architecturally, the Gothic period drew from Roman and Medieval styles, with elaborately carved wooden features and ornamental open tracery commonly found in the upper parts of stained glass windows. 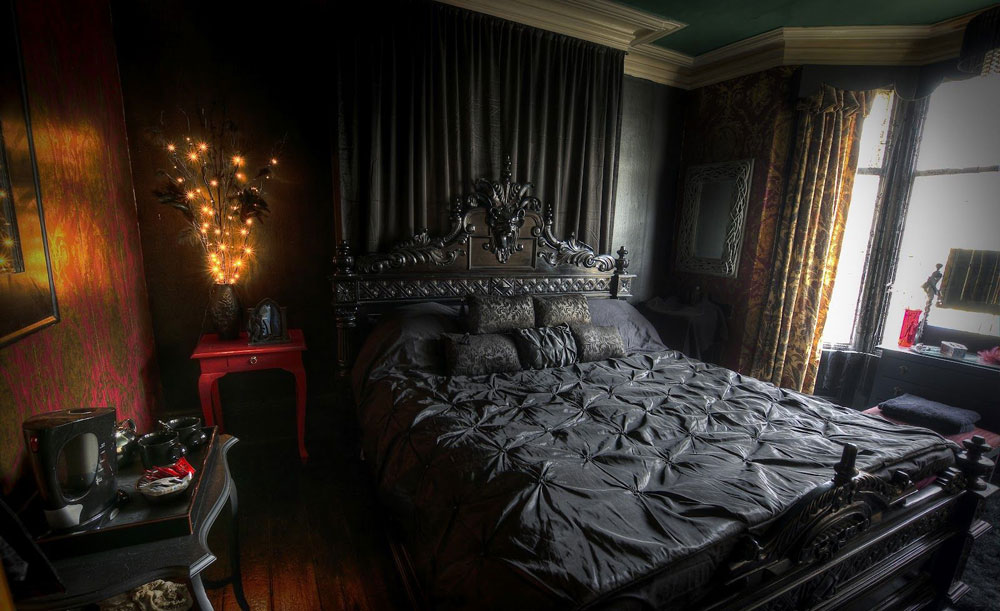 Do not be afraid of being dramatic in your Gothic interior, but keep it elegant.

This is not a design for the timid or understated. When creating a gothic home, drape those high-end fabrics. Use heavy, carved wooden furniture with curved ornate features. Design your Gothic living room with lots of decorative details.  Your goth bedroom will be decadent, luxurious and highly sensual.

Gothic homes should have some wallpaper if you wish to keep it true to its Gothic roots.

Choose from an ornate, patterned wallpaper to create your favorite version of the Gothic style. Other un-papered walls should be painted with rich hues. 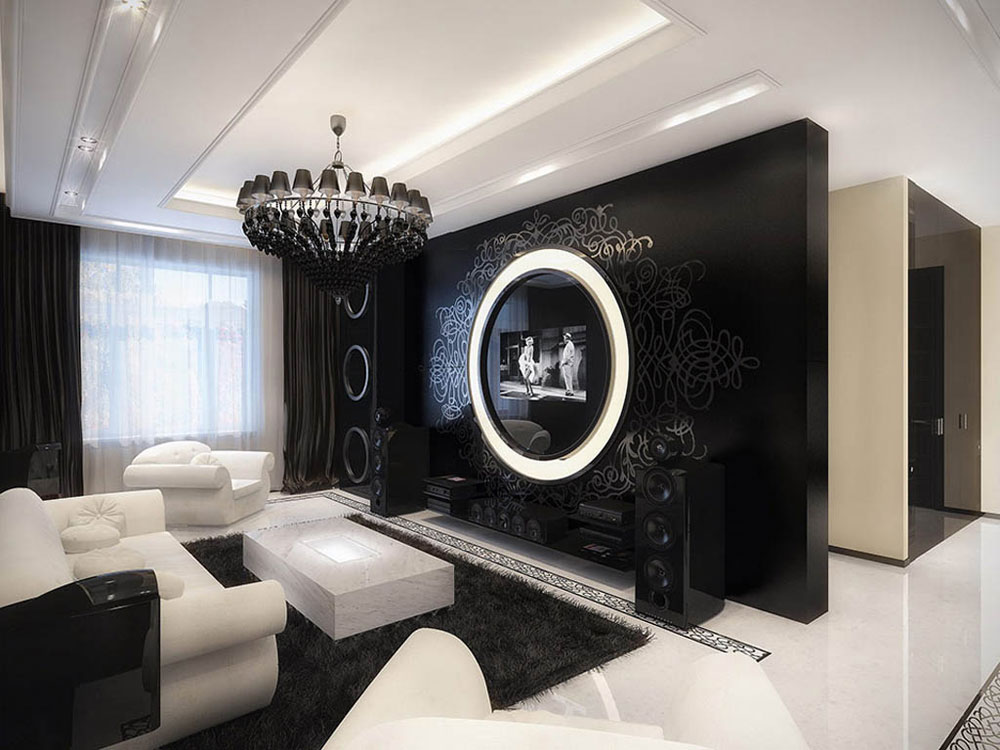 Use black, sparingly or in moderation in gothic houses. You do not want to fall into the Gothic stereotype of a dark, haunted mansion. Focus on the rich, dramatic colors of this era. Medieval Gothic buildings have walls painted in dark but vibrant colors including emerald green, deep burgundy, ruby red or a dark ocean blue.

Fabrics to Choose for Gothic interior 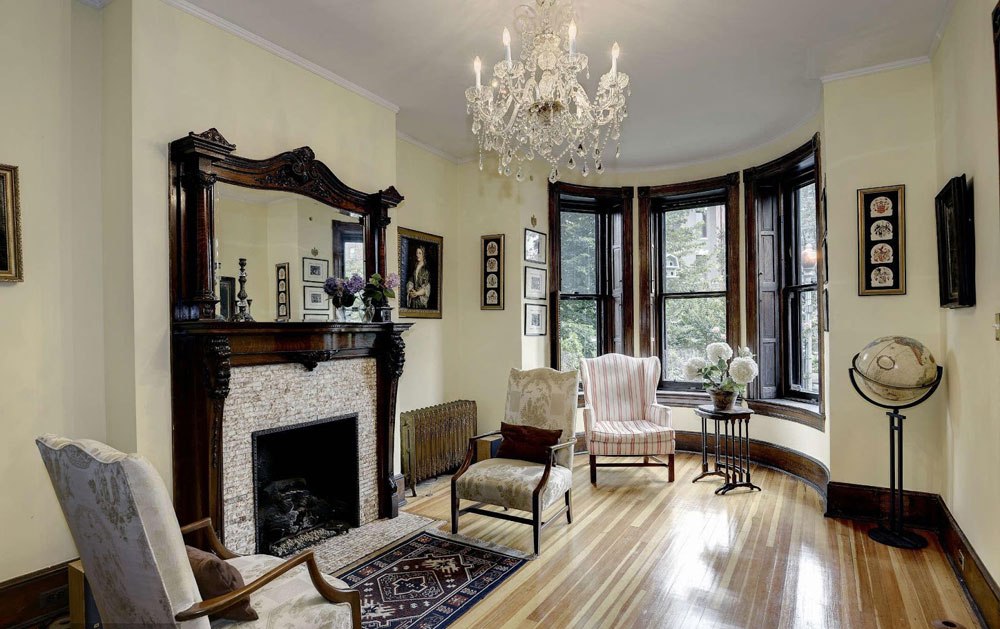 Again, you should choose bold and dramatic, yet elegant materials for your modern Gothic room.

To achieve a Gothic style, pick up silk, satin and velvet fabrics with rich and bold colors, patterns and textures. Velvet is a nice touch for curtains or modern gothic furniture coverings. Satin works well for drapes, bedding, and pillows. Think glamour and decadence when selecting fabric for your Gothic home décor.

Accessories to Choose for a Gothic house interior 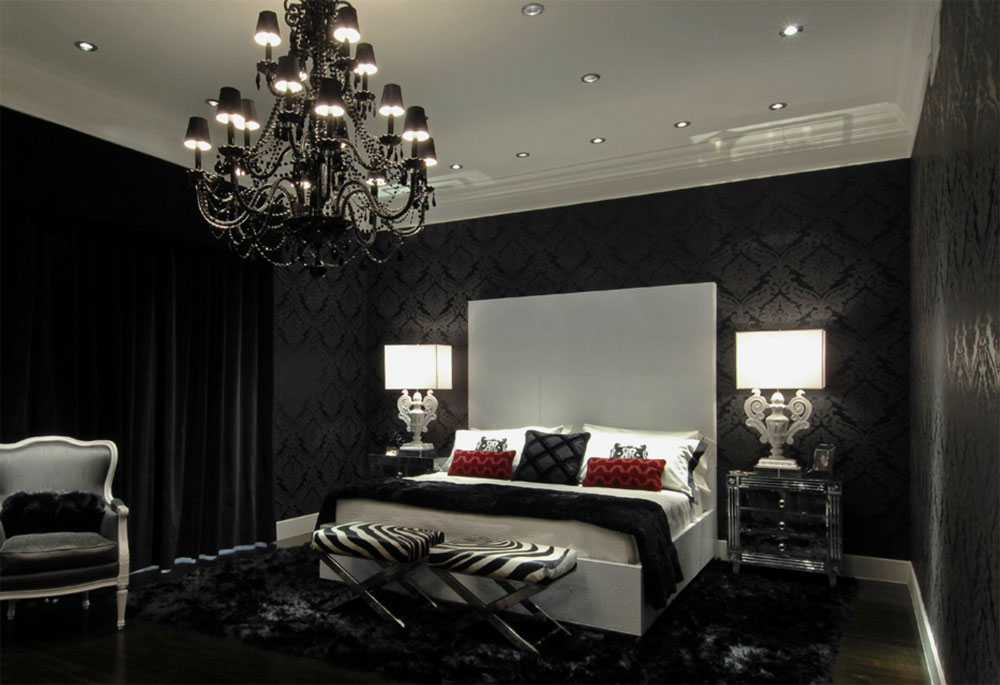 Victorian Gothic homes contained many ornately styled decorations. You will want to select display pieces with heavy wrought-iron, metal, wooden or stone features. Some good examples include pottery dishes, wooden, carved sconces and lamps made of wrought iron.  Add art to your home by searching for gothic paintings.

Setting the Tone in a Gothic Mansion Interior 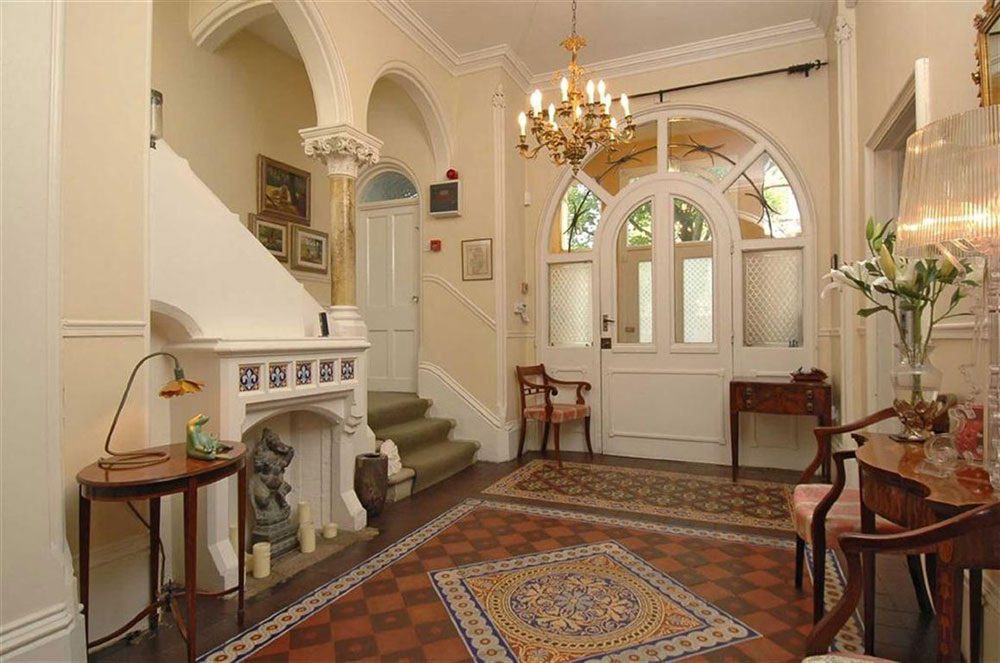 The tone of a modern Gothic interior design should be dark and moody while avoiding the “haunted mansion” stereotype. To do that you may want to choose wallpaper from several collections with black features in unique patterns. You may also wish to select black gothic style furniture carved with intricate details. Finally, a single, striking, distinct piece will give your Gothic room focal point and add some color. 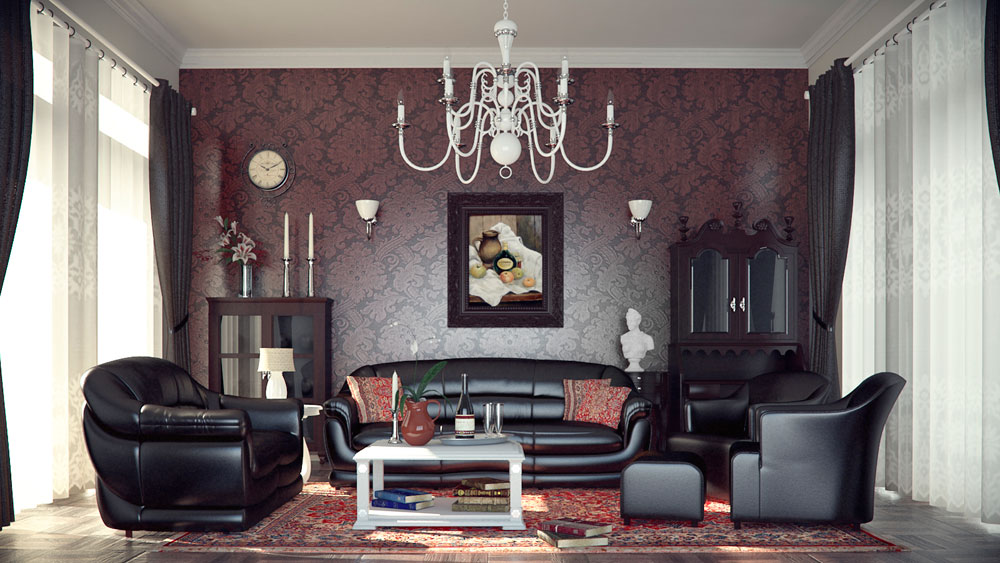 There are so many different styles and pieces that can be added for a Victorian Gothic look. Consider how intense you want your Gothic interior design style to be. To go fully Gothic, add all the dramatic elements we’ve discussed including the fabric, the textures, the rich colors, the dark wallpaper, the heavy curtains, the dramatic windows, the moldings and the attention-grabbing architecture.  Don’t forget the gothic bedroom furniture for a decadent feel to your gothic style house.

If the whole Gothic package seems a little much for your tastes, then use a few pieces in this style to accent your room, by choosing such items as dramatic draperies or an intricately carved table of dark wood.  Touches of goth home décor will still add sensuality to your home.

As with any style choice, you can go full speed ahead or you can use a more subtle, understated approach.

Have you used the Victorian Gothic style in your home? What pieces have you picked to give your home this dramatic flair?

If you enjoyed reading this article about these Gothic Interior Design, you should read these as well:

Reasons Why Molds Are Spreading in Your Bathroom

Closed In: Key Benefits To Having A Screened-In Deck For Your Home

From Student to Success: The Journey of Olivia Williams, Interior Designer