How to Sharpen Kitchen Shears

Do you want to learn how to sharpen kitchen shears? Is the procedure the same as with normal scissors? It is crucial to understand the distinction between kitchen shears and kitchen scissors. They appear to be identical, however, the distinction lies in their blades and handles. Shears have blades that are at least six inches long in order to cut meat.

Sharpening kitchen shears can improve your cooking experience. Kitchen shears may be used in so many different ways that ordinary knives may look obsolete.

At home, how to sharpen kitchen shears? It’s probably easier than you think! 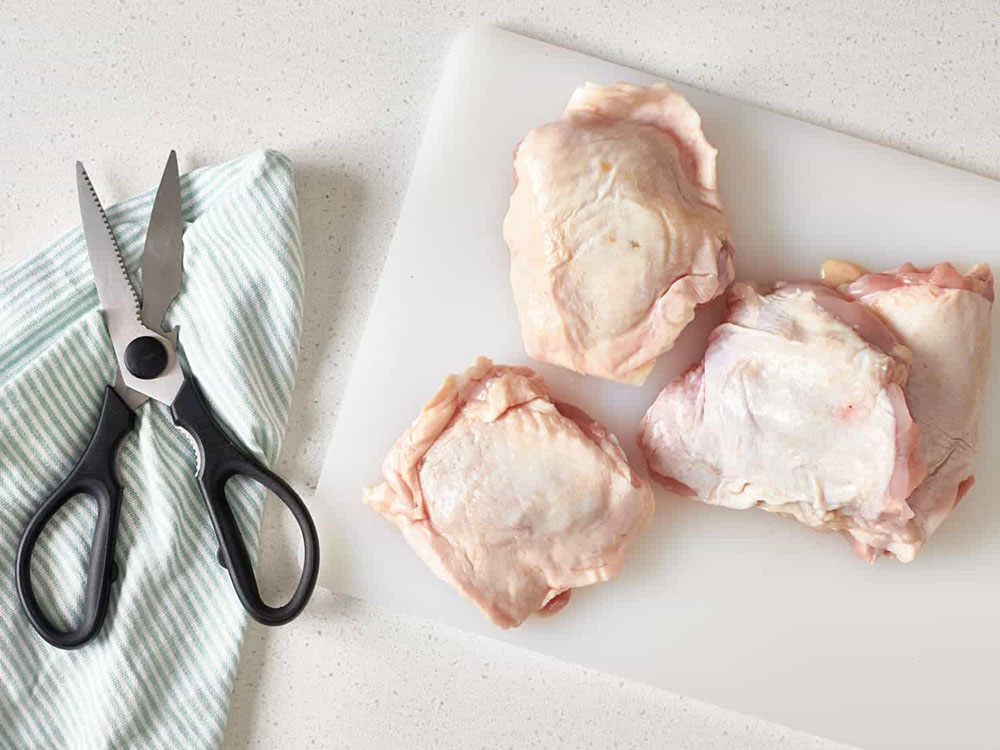 If you have shears that have been well treated and maintained but are now old, you will note that they have discolored, no longer have such sharp edges, and are somewhat loosened. If you believe you are unable to assist them with any process, simply replace them; kitchen shears are not expensive.

If you are determined to try to transform them before throwing them away, you will only need a few common home products and some practice to learn how to sharpen kitchen shears.

These blades are almost always constructed of stainless steel. Whether they are of good quality or not, this material is extremely robust and durable. However, the fact is that it is the ideal substance for experiencing bluntness. 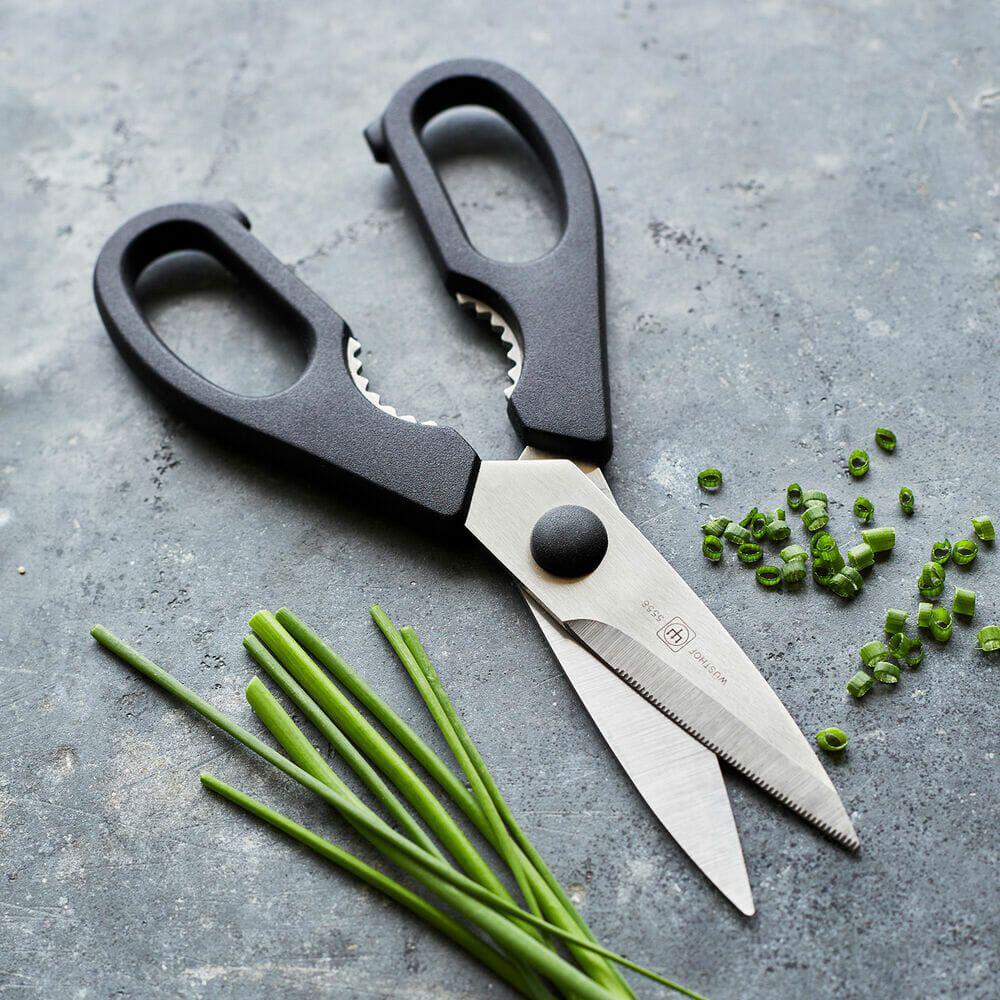 In this post, we’ll show you five alternative ways to sharpen your kitchen shears at home. You can experiment with any or all of these ways to see which one works best for you. 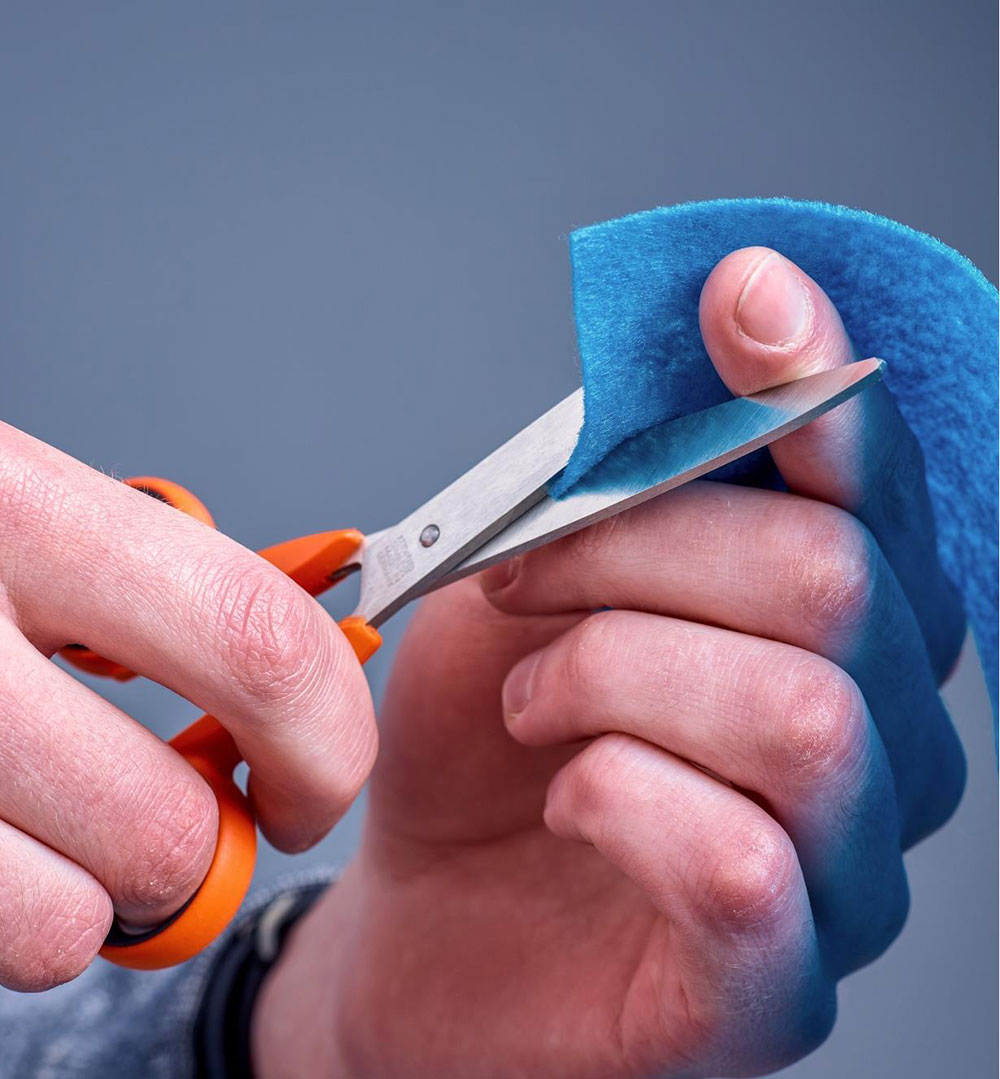 Attempt to obtain a single piece of sandpaper. Sheets of paper with a granularity of 150-200 should suffice, although grits of higher grain will also work well. Bend the paper in half and face the rough sides outward, allowing the sandpaper to cling to both blades as you cut.

To produce lengthy sandpaper strips, you’ll need to cut 10-20 times. With each strip of cut paper, the blades will get sharper. Finally, use a moist paper towel to remove the sandpaper particles from the shears. 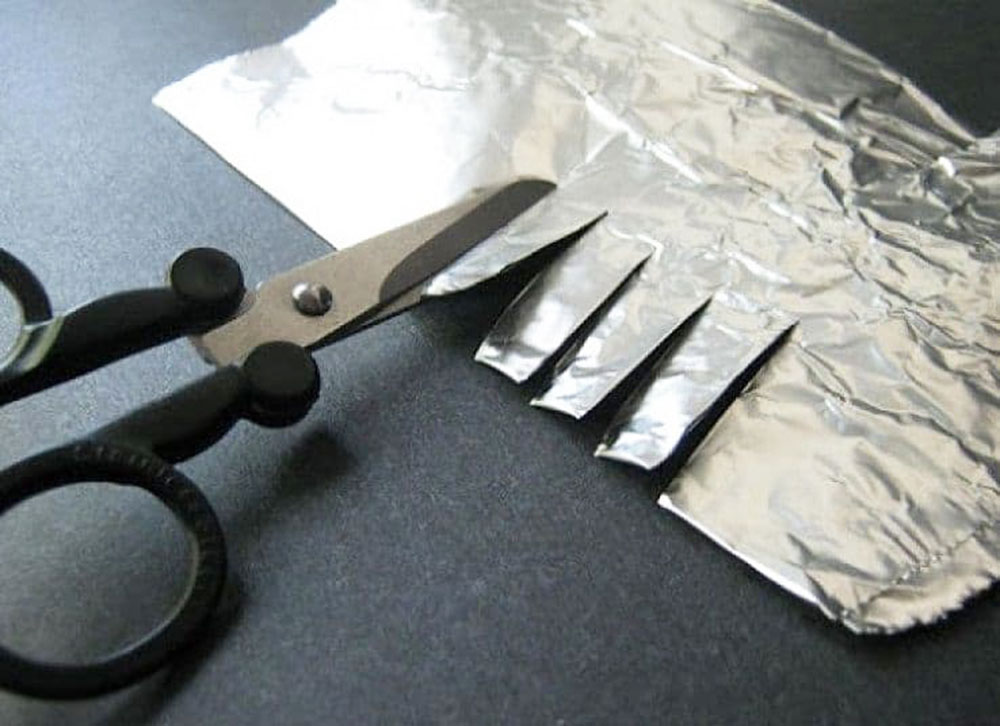 Cut a 10-inch-long piece of metal from a sheet of aluminum. To make a thick foil strip, fold it several times along its length. This deep and multilayer folding will sharpen the shears’ edges.

Now, using the shears, cut the foil down its whole length at least ten to fifteen times, making that the scissors run through each layer properly. Your shears will become sharper as you cut more.

Finally, before cleaning and storing your sharpened kitchen shears, use a clean cloth to wipe away the residue from the surface of the shear blades.

A Glass Bottle or Mason Jar 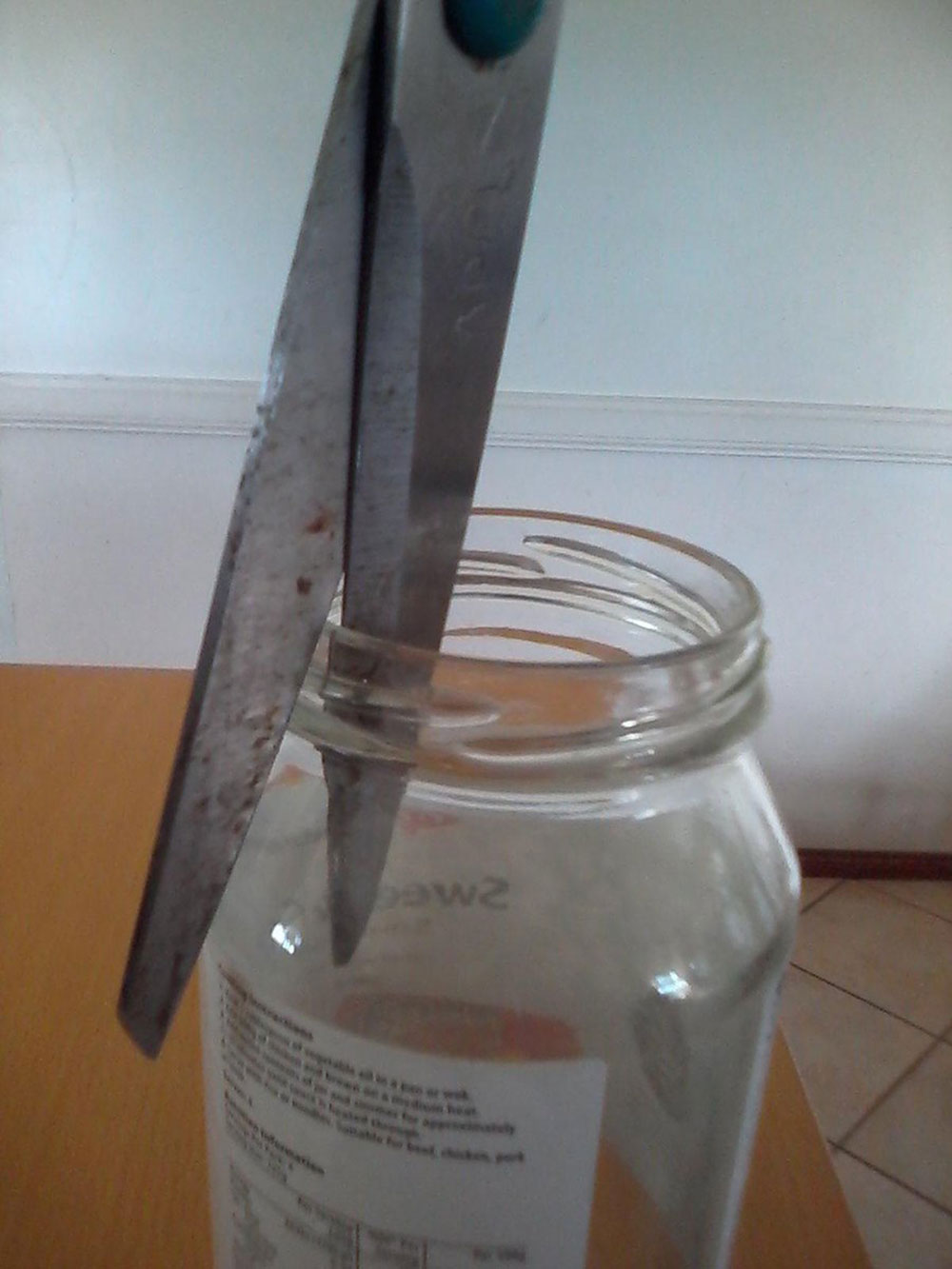 Surprisingly, you can sharpen scissors with a glass bottle (e.g., a beer bottle) or a mason jar.

With your non-dominant hand, grip the jar or bottle tightly.

Then, using kitchen shears, snip the top of the jar or glass container. The whole cutting edge of the blade should be in contact with the glass. You won’t need to use a lot of power or pressure. Of course, this movement may appear odd at first, but it is effective.

In all, fifteen to twenty passes will be required to sharpen the blade’s edges. However, if you are not satisfied with the sharpness of the pair of scissors, you may repeat the operation a few more times.

Wipe the blades with a paper towel and you’re done. 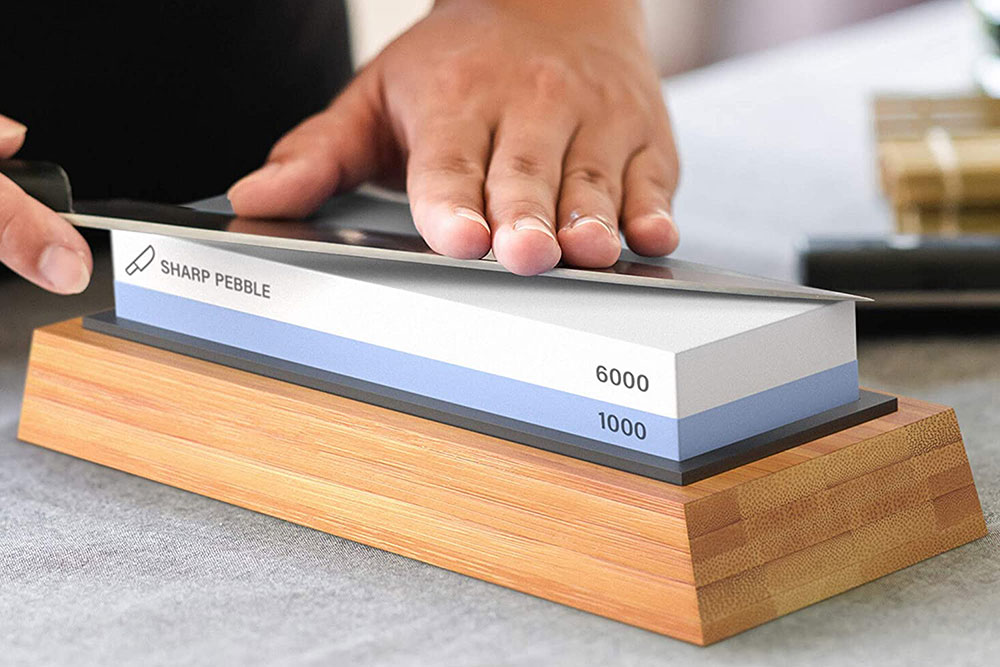 Sharpening tools are available at every kitchen supply store. If you don’t have any, you can use the undersides of ceramic plates or mugs. To begin, first remove the blades from your kitchen shears.

Take out your sharpening stone and flip it over to the coarse side up. It could help to place it on a towel to keep it from sliding about.

Place the flat, inner side of one of the scissor blades on the stone and make 10 strokes from the rear of the blade to the tip, keeping the blade’s edge flat on the stone. The upper portion of the blade may be somewhat concave, but the edge itself is flat, which is what you’re concerned about.

After 10 strokes, you should see new metal around the edge, which indicates that you did it correctly. You can now turn the stone over and give the flat edge of the blade 10 strokes on the fine side, but this is actually optional because you’ve done everything you need to do once you see clean, new metal at the edge. 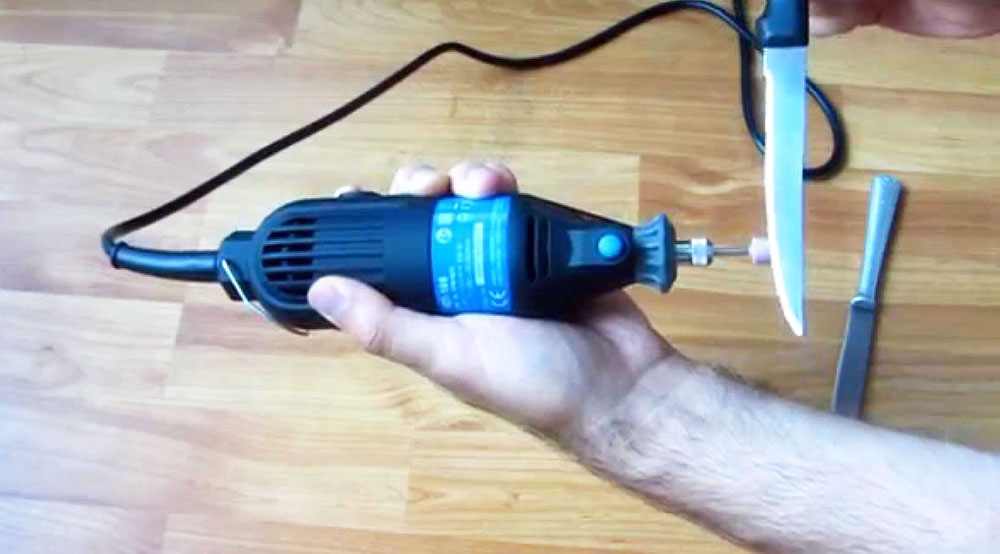 The final option on our list necessitates the use of a rotary tool to sharpen your kitchen shears. Rotary tools may be found at most hardware stores.

This procedure will also require the use of a vise or an extra pair of hands.

Here are the actions to take:

Whatever method you use, these three recommendations will make sharpening scissors simpler. 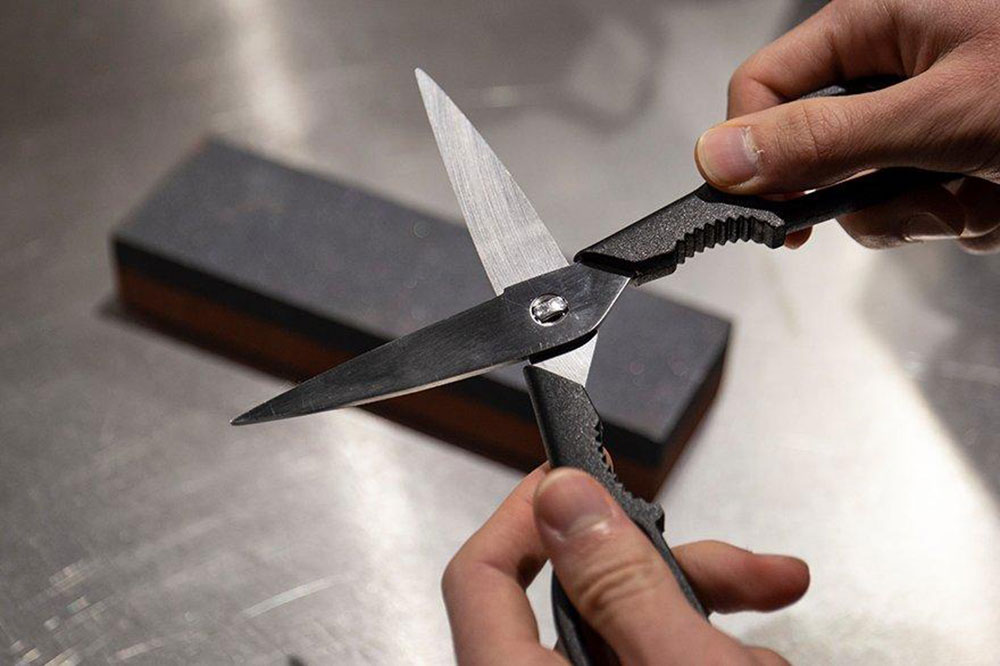 It is critical to sharpen each scissor blade equally while using sharpening stones and rotary tools. This entails repeatedly dragging it across the stone or grinding on it. Otherwise, you’ll have one side that’s significantly sharper than the other.

Get the Angle Right

The edge of the kitchen shears is beveled. When sharpening a pair of scissors, you must follow the beveled angle. 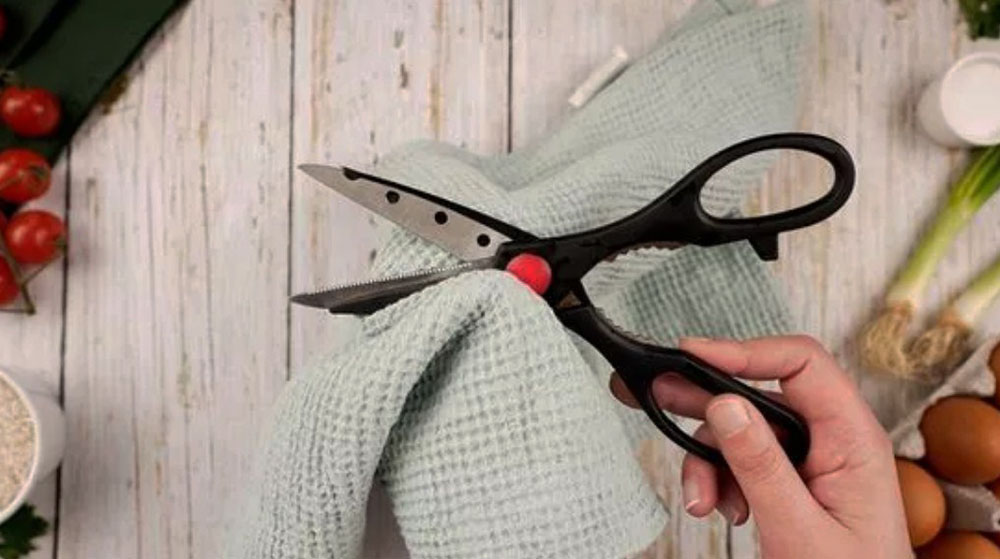 Burrs will form on your scissor blades whether you use a sharpening stone or a sandpaper sheet. They have the appearance of minuscule teeth and should be removed. This may be accomplished by cleaning the blades with a paper towel or by cutting through a thick piece of cardboard.

Final thoughts on how to sharpen kitchen shears

As you can see, learning how to sharpen kitchen shears is not as difficult as you may believe.

As you can see from the ways we described, it is pretty easy and does not take long. You may sharpen your kitchen shears using any of the ways listed above, depending on the materials you have available.

However, for maximum effectiveness, sharpen them at least once every two weeks. Sharpening your kitchen shears on a regular basis might help extend their life. Be cautious as you go through the processes, and put your safety first.

If you enjoyed reading this article about how to sharpen kitchen shears, we also wrote about subjects like how to paint pressed wood kitchen cabinets, how to disguise kitchen soffits, how to organize a corner kitchen cabinet, and how to brighten a dark kitchen.

What Is the Effect of Oven Cleaner On Kitchen Countertops

How to Accessorize a Kitchen Counter with Ease

How to Unclog a Double Kitchen Sink Easily